The 18th century library at Lövstabruk in the North of Uppland has belonged to Uppsala University Library since 1986. The present library building was built in the 1750s. The book collection was mainly gathered by Charles De Geer, father and son,  and contains a number of different subjects, predominantly scientific. For reasons of security all valuable works are kept in Uppsala University Library.

Read about the project The Library of Leufstabruk

Charles De Geer's (1720-1778) book collecting started early in his home town of Utrecht which abounded with bookshops and publishers. He also made frequent visits to Amsterdam, the Hague and Leiden, all of which were of great importance for the European book trade of the time, and learnt to use book catalogues.

Journals like Gazette de Leyde and Leidse Courant were De Geer's most important source of information. By reading the advertisements he learnt about recently published literature and forthcoming book auctions, the catalogues of which were published in the journals. De Geer continued subscribing to these after moving to Leufsta in 1738-39. Other important sources of information for him were periodical publications such as the Journal des savants and Philosophical transactions, which are considered to be two of the first modern scholarly journals. In Sweden, De Geer bought some of his foreign literature from the German bookseller Gottfried Kiesewetter in Stockholm, who had a privilege to import books.

From the Swedish scholar Olof Rudbeck the Younger De Geer had the opportunity, besides the two published volumes of Campus Elysii, of acquiring the big hand-drawn and hand-coloured illustrated works Blomboken [The Flower Book] and Fogelboken [The Bird Book]. Allegedly, Carl Linnaeus said about Fogelboken that "it appears not to be the work of a human hand".

At the auction following the death of Rudbeck the Younger, De Geer bought books from his book collection, some of which had been previously owned by the father, Rudbeck the Elder. Among these books was Rudbeck the Younger's book of sketches Iter Lapponicum - A Journey to Lappland. On the same occasion De Geer also purchased Basilius Besler's Hortus Eystettensis printed in Nürnberg in 1613 in two volumes, one of which is coloured. He also bought four manuscripts written by the young Carl Linnaeus including Catalogus plantarum rariorum Scaniae dated 1728 and Adonis sive Hortus Uplandicus dated 1731. In the latter Linnaeus classifies plants in Uppsala's botanical gardens according to his new sexual system.

In addition to entomology, general zoology and botany, there is also ichthyology, the scientific study of fishes, in Charles De Geer's book collection. One splendid example is Louis Renard's beautiful book with hand-coloured plates from 1754 about fishes and crustaceans in the sea surrounding the Islands of the Moluccas.

Uppsala University Library's acquisition of the approximately 8,500 books was made possible by public grants and two large private donations. The book collection is listed in a catalogue compiled by E.G. Lilljebjörn. There are copies of this catalogue, with the University Library's shelfmarks, in the Special Collections Reading Room and in the catalogue room at Carolina Rediviva. The printed books are now also being catalogued in the national union catalogue Libris and the local library catalogue Disa.

The project The Library of Leufstabruk 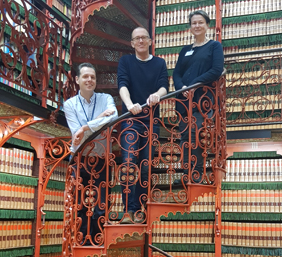 The Library of Leufstabruk is a collaborative project between Uppsala University Library and the Koninklijke Bibliotheek, National Library of the Netherlands, during 2018-2020. Riksbankens Jubileumsfond (RJ) has granted means to the project, in order to make the book collection of the library much more accessible for research. Participants in the project are project manager Peter Sjökvist, Helena Backman and Alex Alsemgeest.

The project aims at making the book collection of the library much more accessible for research through a complete registration in modern databases and by connecting these with the Dutch Short-Title Catalogue, Netherlands (STCN). There will also be a detailed register of provenances and copy-specific information in cases of special interest, for example a selection of bookbindings in Alvin - platform for digital collections and digitised cultural heritage. Archival materials concerning the library including correspondence with the Dutch booksellers Luchtmans will also be digitised. There will be a full digitisation of copies from previously unattested Dutch editions. By these measures, access to and knowledge of the highly international material at the library of Leufstabruk and its history can be greatly improved for researchers nationally and internationally.